Much like the Atlanta movie scene, development is picking up steam in the most populous city in the state of Georgia. According to Yardi Matrix, a total of 22,466 units were underway in Atlanta as of May, with more than 14,000 originally scheduled for completion by the end of the year. Here are the top Atlanta submarkets leading construction activity in 2020. 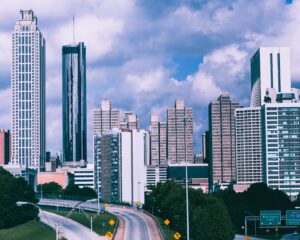 Peachtree Hills is a neighborhood within the Buckhead district of Atlanta, Georgia with a rich history. The Civil War Battle of Peachtree Creek took place very close to present day Peachtree Hills.

It primarily contains residential buildings, however, commercial buildings are scattered throughout the neighborhood. Located between interstates 75 and 85, the submarket has seen an uptick in development activity with 1,100 units delivered over the past decade. Demand for new supply is increasing as occupancy continues to climb.

Suwanee is located in northern Gwinnett County and is bordered by the Chattahoochee River. Neighboring Buford has several trails throughout the city, which includes miles of walking paths accessible from both the Gwinnett Environmental & Heritage Center as well as the Mall of Georgia.

In addition to the parks run by Gwinnett County, there are five city parks located throughout Buford. Currently, construction activity in the Suwanee-Buford submarkets are robust. Last year, a 240-unit community reached completion, boosting deliveries by more than 80 percent from the previous year.

Decatur is located in DeKalb County, Georgia, which is part of the Atlanta metropolitan area. The city is positioned northeast of Downtown Atlanta and includes several neighborhoods filled with historic structures. While there were only two projects underway in Decatur at the end of May, upon completion, those projects will be the highest number of units completed in the area in more than a decade.

Midtown West, located in West Midtown, was once a largely industrial area but is now home to many urban lofts, art galleries, music venues, and restaurants. The arts scene rivals Midtown, Atlanta’s premier arts district, but is focused more on contemporary art rather than classical. Thanks in part to its proximity to downtown, the submarket’s construction activity has boomed over the past two years. In 2018 and 2019, nine projects totaling more than 2,700 units came online, exceeding combined deliveries in the previous eight years.

Grant Park is one of Atlanta’s oldest and most important historic districts. It’s bordered by the Cabbagetown neighborhood and Ormewood Park. Grant Park is the home to Oakland Cemetery, the burial site of many Civil War soldiers as well as former governors and mayors.

East Atlanta is a neighborhood located on the eastside of Atlanta, Georgia. In recent decades, East Atlanta has seen a rise of street art.