As we settle into fall and approach All Hallows’ Eve, a number of spooky properties located in the Hollywood of the South come to mind. Atlanta certainly has no shortage of historic buildings that come complete with some ghostly stories. Here are a few properties to check out if you’re feeling spirited this Halloween. 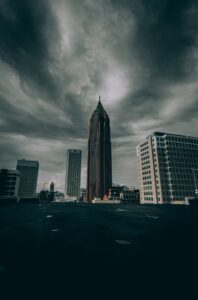 Originally constructed in 1928, it’s not surprising the Fox Theatre has its share of ghostly tales. The historic building was intended to be a Masonic lodge, and the Shriners looked to ancient temples of the Far East for inspiration. Ultimately, the over-the-top structure became a financial burden, and shortly before its completion, they leased it to movie mogul William Fox who turned it into a theatre.

Over the years, theatergoers have reported orbs, shadowy figures along the walls, and sudden blast of cold air.

Once known as The Winecoff, the Ellis Hotel is the site of one of the deadliest hotel fires in American history. In 1946, 119 people lost their lives after the hotel went up in flames. Since that tragic event, hotel guests have reported paranormal activity throughout the property, which includes the hotel’s fire alarm mysteriously triggering at 2:48 am; the exact time the fire erupted in 1946.

Known as “the castle on Peachtree,” Rhodes Hall was constructed in 1904. The amazing structure was once the residence of wealthy furniture founder Amos Rhodes but has since been converted to a museum and venue for social and corporate events. The upper floors are also headquarters for The Georgia Trust for Historic Preservation.

Ghostly appearances by a “dark” shadow in the basement, sounds of noisy children, and lights that turn on and off have all been reported by visitors. Rhodes Hall makes no secret of its reputation as one of the most haunted locations in Atlanta and continues to be the object of paranormal investigations.

Formerly a romantic Bed and Breakfast, today the Beverly Hills Inn serves as a private apartment complex. Over the years, people have reported witnessing orbs and the presence of three women on the third floor. The hosts of popular Atlanta radio show, “The Bert Show,” even attempted to stay an entire night, but failed after they experienced an unwanted presence.